No items found.
Product is not available in this quantity.

Essential for your brain and nervous system

Vitamin B12 plays a role in the normal functioning of your brain and the nervous system. It also helps with the formation of red blood cells (1).

‍According to a study from 2003 from NCBI, more than 90% of vegans who did not take supplements had a B12 deficiency (3). Also, in the general public, there is a deficiency between 1,5% to 15% according to the National Institue of Health (NIH) (4).

Vitamin B12 deficiency is most commonly found with people eating little or no animal foods such as vegetarians and vegans as B12 is only found in animal foods.

The following symptoms can be shown with Vitamin B12 deficiency (5):
- strange sensations, numbness, or tingling in the hands, legs, or feet
- difficulty walking (staggering, balance problems)
- Anaemia
- A swollen, inflamed tongue
- difficulty thinking and reasoning (cognitive difficulties), or memory loss
- Weakness and fatigue

Being optimal on Vitamin B12

‍As an adult you need a daily recommended amount of 2.4 mcg B12 which is equivalent to a double patty cheeseburger or a small can of tuna fish in water (3 ounces) (6). You can see a list of selected foods containing Vitamin B12 further down in this article.

Since everyone is different, there are not determined any optimal values of B12 and your body only absorbs as much as it needs, so there is not any major negative effects from overdosing either. If you get the B12 you need, you might have improved:
Nerve conduction amplitude and velocity (7)
Cognitive Functions such as verbal fluency and better word recalling (8)

Food sources of Vitamin B12

‍It is naturally found in animal products including eggs, poultry, fish and milk products but in general not in any plant foods unless it’s fortified. According to NIH you can find Vitamin B12 in the following foods: 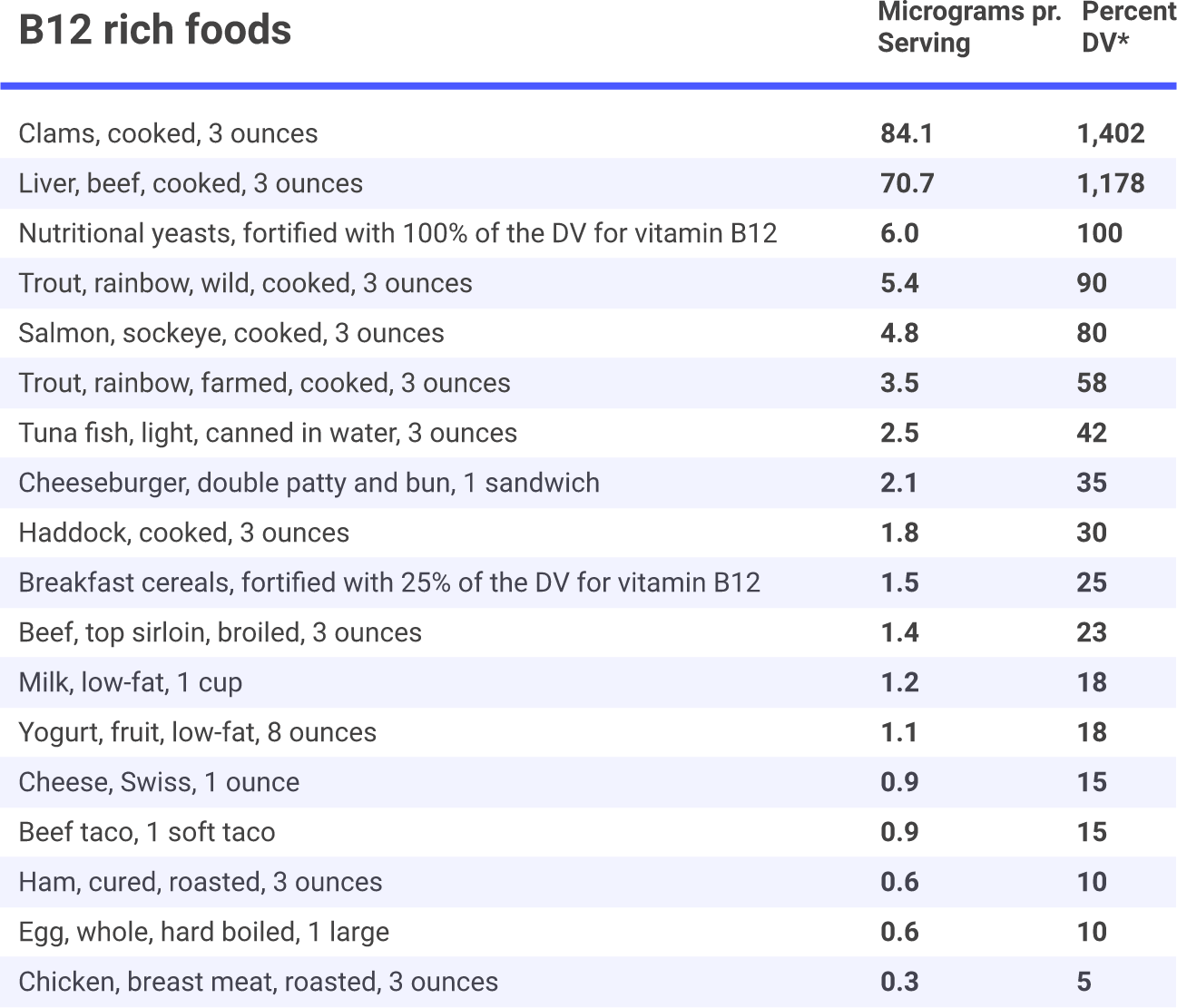 If you’re not getting the recommended amounts of Vitamin B12 through your diet, then it’s also possible to get it through dietary supplements.

Vitamin B12 is found in most types of multivitamins and they are also found in the pure form or with nutrients such as folic acid are also available.

How do i know my values?

The best way to measure the precise values of Vitamin B12 is through a blood test. It is also possible to see the B12 levels through a urine test.

Both of our blood panels (Essential and Premium) is testing the Vitamin B12 levels, so you can see if your daily life gives you the vitamin D you need!

Your data is safe with us. We made it our top priority to protect your information. Therefore, we use leading encryption technology to keep your information secure. Read more in our data privacy section. If you are interested in out Terms and Conditions you can find them here.